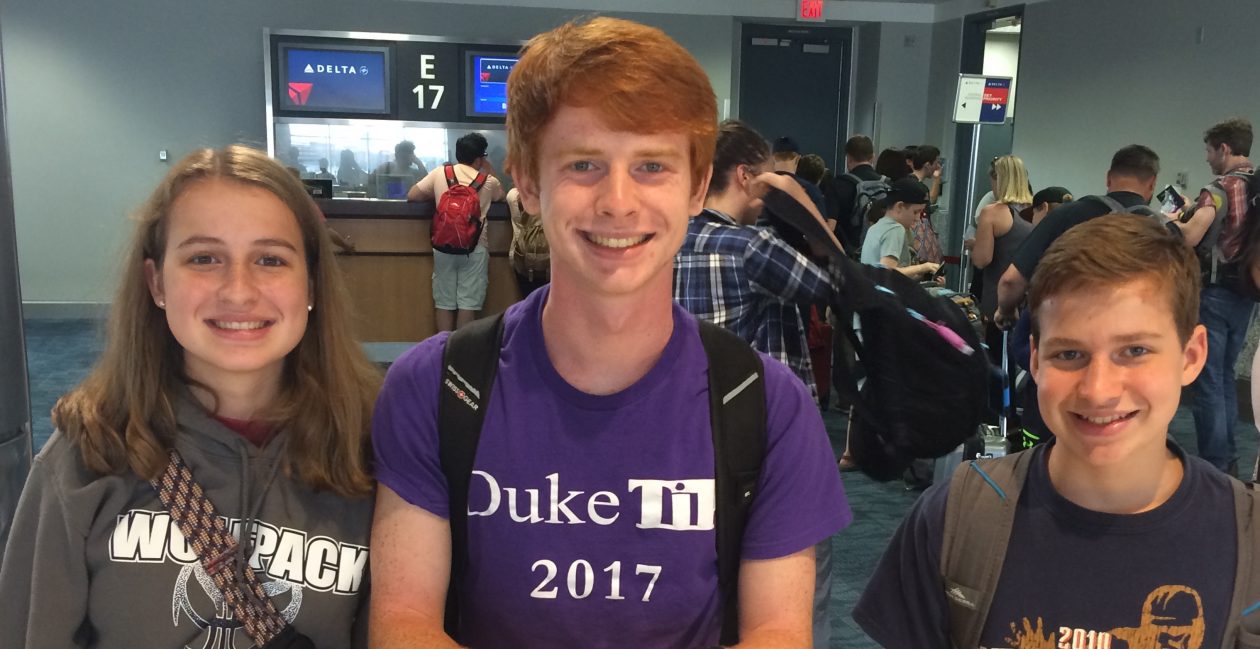 So, life is full of moving pieces.  And today was a day of complications.  The main issue here so far seems to be getting food.  Breakfast required a wait in line for over an hour, with many of the breakfast choices  having run out by the time we reached the counter.

Next it was on to the team meeting to hear from our heads of delegation regarding technical details of the tournament.  Here we learned that the start time for round 1 was being pushed back two hours due to issues with ID badges and players still having difficulties at the airport with visa issues.  With dinner now being encroached upon by a hopeful 5 o’clock start, we wisely chose to forego the cafeteria and visit the food court for lunch.

So, after a long day of waiting, Drew was anxious, and I felt he needed to burn off a little energy.  Zoe, Drew, and I were throwing the football around on a patch of grass when I noticed a boy looking longingly at the game from a bench nearby.  When I asked him to join us, his mom politely said, “no English,”  but I motioned for him to come, and he readily joined in.  After some initial foibles, he quickly learned to catch and throw the oddly shaped ball, and jumped ahead of both Drew and I in a game of pick-up.  Too soon it was time to head in and prepare for the round.  Through halting words, I learned that the boy is from Iran, and his mother and I exchanged smiles and encouragement.  Interestingly, I later ended up talking for an hour with another Iranian parent, mostly about chess, a little about life, and again found much common ground.

Once again, things got a little harried as we attempted to make it to the first round of play.  The pairings were not posted when it was time to leave for the playing hall.  Packing up the laptop, we took the brisk walk from the women’s campus over to the men’s.  Again, the tightly packed mass of people trying to find their way into too small doors, impatient for a round now three hours late.  Finally, a tip from a mom of one of the three representatives of Fiji, and I located Drew’s pairing on a sheet of blue paper with small print taped inside the glass of the hall.  Drew faced a player from Mongolia who is ranked 17th in his section of about 170 players.

I had hoped to be able to share Drew’s game with you, but suffice it to say that more complications arose.  Drew resigned the game on move 48 in a lost position, conceding the win honorably to his worthy opponent.  Analysis with GM Nick DeFermian revealed sound opening play, after which he was unable to hold off an aggressive attack.  During the game Drew mounted a protest to the tournament director when his clock did not operate properly and maintained his composure when the director did not fix the issue.  He also spoke with the US head of delegation to explain the problem so that hopefully it will be fixed for tomorrow’s games.

Gaining perspective on the day, it was all in all both wonderfully diverse and yes, complicated.  When the complications can be seen as opportunities, the frustration eases and the beauty of the great diversity of God’s creation encourages the spirit.  Being thankful in the moment for whatever the moment holds …